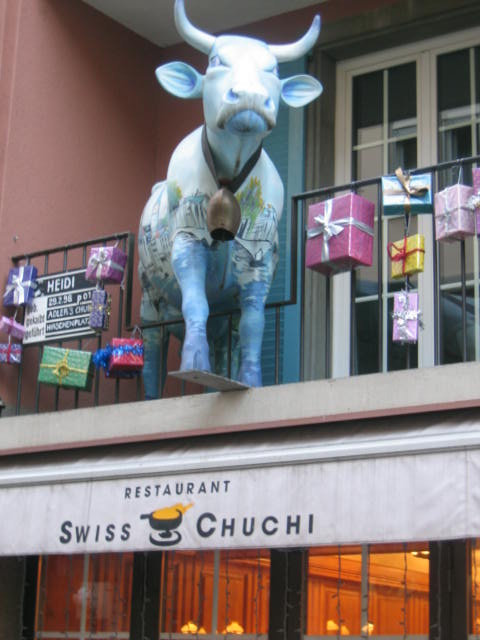 So there I was, walking along Niederdorfstrasse and what do I see but a big blue cow over a restaurant.
The Swiss, I can now safely say, are a strange bunch of people.  In the nicest possible way do I mean that. The place has grown on me, to the extent that I didn’t even feel put out by the blue cow on the balcony.
What I didn’t appreciate was that the cow is over a restaurant that sells fondue and raclet.  These are cheesy dishes, that I think smell like week old toe jam.  I also mean this in the nicest possible way.  The bf got very defensive when I said the toe jam thing.  He says that’s his culture.  Well babes, hate to break it to ya, but your culture smells like unwashed feet!
Shite, should not have said that so close to bedtime.

It’s Thursday again and all around there is great panic and consternation as yet again I am stuck.
Thursday’s the day I’m supposed to submit copy for my weekly column with the Trinidad Guardian and as usual I’ve been sitting here all day staring at a blank file. Actually sometimes I’m okay.  Usually this happens when the Prime Minister does something so spectacularly stupid that the venom flows quite freely.
I guess liming in Zurich makes me feel a lot more out of touch with what is going on in Trinidad and by extension the world, than usual. I haven’t really written about my Zurich adventures in my column, I guess because at heart I find it all rather, um, not me.  Of course exactly who ‘me’ is, that’s a discussion for another time when I’m a little further on in the process of figuring it out.
A lot of it is still a deep seated fear that readers couldn’t give two shakes of a rat’s backside what I have to say.  In Trinidad we don’t really have a culture of revolutionary journalism.  There have been writers who have touched me in the newspapers, but to say that we have real voices that stand for something consistently , well I’d be really hard pressed to find an example of such.
Too besides, being a columnist has the potential to descend into a kind of public wank that I hate.  Kind of like blogging.  I guess here I have a lot more carte blanche… i can say what I really feel, most of which is outside of the Guardian’s style rules.
But I am grateful for the space and I can see how my writing has evolved in the three years since I first got the gig. Back then I think I was one of the youngest columnists in the main newspaper, as opposed to being one of those cheesy youth speak out kind of boxes that they usually try to stick young people in.  And I do say some pretty outlandish things in a newspaper that has the reputation for being the most conservative in Trinidad.  Which is not saying very much really.  Because Trinis for the most part are quite conservative but like to give the impression of being leggo beasts.
Hmmm, I actually feel kind of inspired now…

Packing is a bloody pain. It is not one of the things I am good at.  one would have thought my skills would have improved by now, considering I’ve been doing the designer vagrant thing for the past few years.  Alas, it is not to be so.
I’m trying to achieve the minimalist packer aesthetic but I am a shameless hoarder of abjectly pointless things.
I’ve been trying this weekend to be brutal and throw away all the asolute un-necessities I have amassed in three years of living in babylon-don.  But it’s hard because so  many things have sentimental value.  Books, posters, postcards etc etc etc.
It would be easier if I could ship everything I own to one definite location.
But as of now I guess my spirit feels homeless.  I’m off to Zurich for a bit, then I’ll be off to Trinidad for a bit.  And at some point I’ll probably want to come back to London.  But my level of fedupcy at living out of a suitcase is growing daily. I want to do things like buy a lamp.  Own some cheesy unbreakable plates and cups.  An iron even.
*sigh*