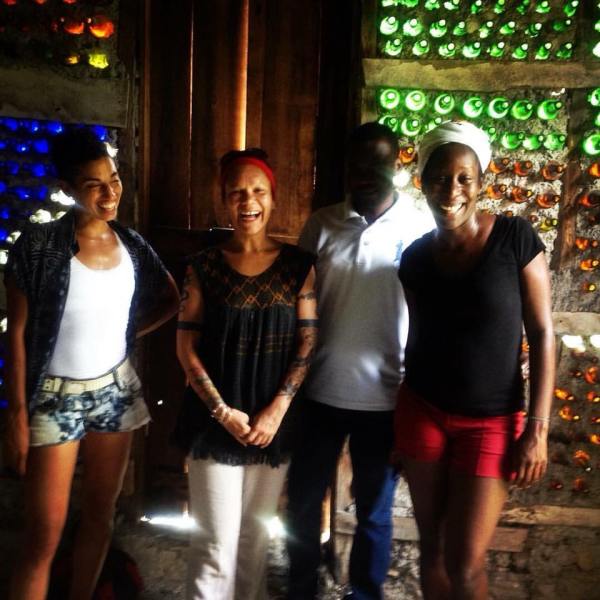 After the 2010 earthquake a small house was made out of rubble, wood and glass bottles. There is an altar and the sun filtered through the walls of blue, green bottles bathes the inside of the house in silence and light. The healing house is an important part of the post-earthquake recovery. It is a reminder that natural disasters require not just reconstruction of buildings but reconstruction of emotional, spiritual, mental stability. I’ve been thinking a lot about Haiti in these days following our own earthquake encounter. Like everyone else here I’ve made jokes while freaking out silently. Haiti we know has more than 200 years of staring war, tragedy, devastation and disaster in the face and managing somehow to emerge and find ways to keep going. I’m not so sure about T&T. We continue to fool ourselves that God is a Trini and that absolves us from adopting a more proactive stance on many things. It also means we take a lax approach to the mental health implications of natural and human disasters. In addition to being mindful of our building codes, we also need to be aware that humans will need to be checked for cracks and damage too. 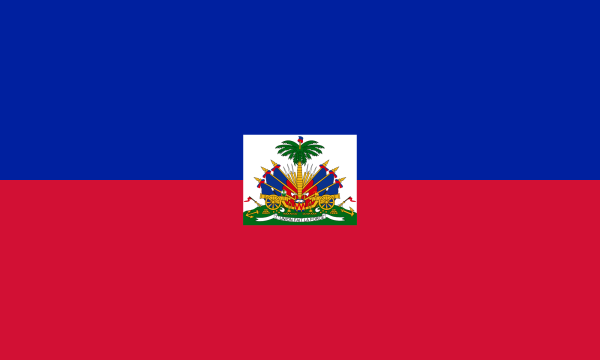 Disaster time again, for our sisters and brothers in Haiti. Already the vultures circle, using this tragedy as another opportunity to take advantage or worse, to engage in the pornography of suffering black bodies.

Now is not the time for tears, hand-wringing, there are lots of organisations that are quietly doing good work in Haiti that does not line the pockets of multinational aid corporations,  or continue to fatten the Port au Prince elite.

The following is a list I’ve compiled thanks to friends in Haiti and its diaspora.  Please do your own research on the organisations listed below. I’ll keep updating it as more info emerges.

A group of citizens are doing a non-organisational collection of items from Monday 10th October. Collection/Drop-off point will be at the Veni Mangé Restaurant 67A Ariapita Ave, Woodbrook.

ITNAC Trinidad based organisation sending volunteers soon to Haiti asking for donations of  food/clothing/shoes/women’s sanitary wear/insect repellent as well as urgent cash donations in any currency.

Haiti Communitiere   Donations go directly to help communities gain access to the resources, knowledge and skills they need to rebuild.

Art Creation Foundation for Children (ACFFC)  is an arts based non-profit organization created for the personal growth, empowerment, and education of children in need in Jacmel, Haiti.

Sakala  provides a safe space in the heart of Haiti’s largest underdeveloped area, where youth come together to grow, learn, and play.

Fondation Aquin Solidarite (FAS)  is a non-profit organization, founded in 2005, to provide educational, cultural, sports and economic support and mentoring to the city and the people of Aquin, located 117kms southwest of Port-au-Prince.

Flatbush-YMCA at 1401 Flatbush; the Multicultural Bridge Project at 1894 Flatbush Ave.; and the Haitian Family Resource Center at 1783 Flatbush Ave. 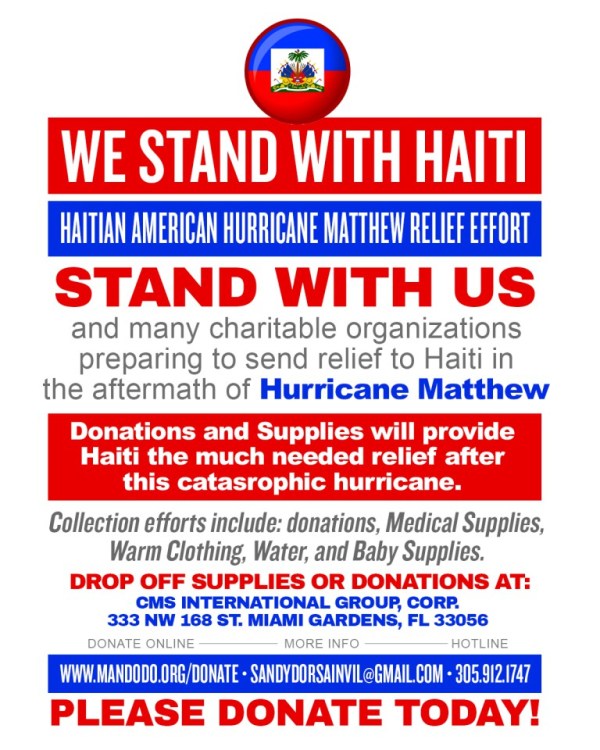 Western Union is offering toll free transfers to Haiti from United States, Canada , France, Chile, Brazil and the Caribbean at participating outlets, on their website and on mobile Western Union, where available.

I’m planning my first trip to Haiti next month as part of Ayiti Resurrect a collective of artists, farmers, holistic healers and cultural workers who have come together to contribute their skills to healing the trauma of post-earthquake Haiti.

We’re just $500 away from our goal of USD10,000, which goes towards supporting community based programmes in farming, the arts, women’s empowerment, computer literacy, sustainable energy.
I’m excited about this project because it represents a critical shift in the approach to ‘charity work’. It’s not about giving handouts and being the saviour, it’s about being there and asking the community what their needs are and doing the work that leads to sustainable livelihoods.
So if you have please give and if you don’t please share the info with someone who might. Also if you’re in Trinidad we are hosting an event on April 9th at Big Black Box at which you can contribute cash and/or essential needs like First Aid items, women’s sanitary wear, small toys (no guns please).

It is especially repugnant that the ruling ignores the 2005 judgement made by the Inter-American Court on Human Rights (IACHR) that the Dominican Republic adapt its immigration laws and practices in accordance with the provisions of the American Convention on Human Rights. The ruling also violates the Dominican Republic’s international human rights obligations. Furthermore, the ruling has created an environment where, with the abrogation of rights that flow from citizenship, arbitrariness can flourish as illustrated by recent media reports of the forced deportation to Haiti of persons claiming to be Dominican and with no linguistic or familial ties to that country.

Last night I attended an impromptu audience with Prime Minister of St. Vincent and the Grenadines Ralph Gonsalves who was in Trinidad for the Heads of Government Meeting at which they finally made their statement condemning the shocking and racist court ruling in the Dominican Republic against Haitian descended Dominicans.

The meeting was hosted by Jouvay Ayiti – a Trinidad based collective dedicated to addressing the question of Haiti through what Rawle Gibbons described last night as the ‘mechanism of mas’.

Jouvay – the opening of Carnival celebrated in several islands across the Caribbean- has always been a point of protest and social commentary in Trinidad.

So the choice to use mas as a means of confronting our past, present and future engagement with Haiti is not only valid it is vital.

Jouvay Ayiti first responded to the DR question on November 6, with a mas action in Port of Spain. This was followed up with a petition sent to Caricom.

Meanwhile it’s taken over two months for a statement to come from Caricom and it is largely, I am inclined to believe after last night’s audience with the SVG PM, due to his agitations. He even joked about the similarity in the language of the Caricom’s statement and the letters he sent to the DR’s  on October 11 and another on November 11 (neither of which has received a response to date).

As Angelique V Nixon points out in her article on Groundation Grenada, Haitians are also regularly discriminated against and deported from the Bahamas.

The Bahamas — somewhat like the DR’s new ruling — also denies rights to the children of migrants, the difference being that children of migrants do have access to birth citizenship rights, which they have to apply for at 18. However, this process can take years, especially if one does not have access to legal assistance. Unlike the DR, Haitian Bahamians do have the right to stay in the country until they turn 18. However, many Haitian Bahamians remain stateless after 18 because of the difficulty in securing their status. On top of the legal challenges that Haitians and Haitian Bahamians deal with, they are socially stigmatized — from slurs and stereotypes to poor treatment at public clinics and hospitals, Haitian people bear much blame for a variety of social ills in Bahamian society. When times are rough, tourism is down, crime is on the rise, or people get laid off, Haitians are the scapegoats for everyone’s troubles and strapped resources. This resonates eerily with what has happened in the Dominican Republic, and I offer this comparison to remind us of the vulnerable position in which many Haitian migrants find themselves — not only in the DR but also elsewhere in the region.

Gonsalves openly stated last night that he disagreed with Caricom’s ‘quiet diplomacy’ approach. He read the two strongly worded letters he sent to Medina and also the letter he sent to Venezuela’s  Maduro, calling on him to consider suspending them from the Petrocaribe agreement.

So aside from threats of suspension from Cariforum and CELAC, the Petrocaribe issue is probably going to be a defining factor in the outcome of this regional embarrassment.

Money talks, after all.

And in as much as I am glad that Caricom has finally found  voice and interest enough to make a statement (Norman Girvan in introducing Gonsalves last night said it was the first time he could feel proud of the Community) I’m still concerned about issues of free movement in the Caribbean.

Since the issuing of this statement, the planned talks between Haitiian President Michel Martelly and a high profile team of officials from the Dominican Republic have fallen through.

So what comes next? Aside from the threat of sanctions and diplomatic snubbing how are we really going to start to address institutional and other types of racism in the Caribbean between nations?

It brings me again back to my concerns with regards to the reparations issue – what is Caricom’s policy position on the complexities of our ethnic and racial interactions?

Because let’s face it, the reason for our lack of action on Haiti is the fact that in 1804 a bunch of enslaved Africans had the audacity to fight against the French, win and then declare themselves a Republic.

And the question of blackness and/or African ancestry is still a point of shame for far too many Caribbean people of African descent, despite the fact that we have given the world some of the leading luminaries of Pan Africanism (Henry Sylvestre Williams, Marcus Garvey, CLR James, George Padmore, to name a few). And of course one of the major issues plaguing our relationship with Haiti is the continued fear and loathing of African spiritual traditions

One of Gonsalves’ closing observations was the virtual non-existence of any critical thought or action coming from the University of the West Indies.  This is something that has bothered me for years. I’m watching and waiting but I’m not terribly hopeful.

Gonsalves started his speech talking about his days as a student at the University of the West Indies Mona campus when he organised the protest against the banning of the late great Walter Rodney who dared go into the ghettoes of Kingston to ground with his brothers.

45 years later the issues we are afraid to confront are similar if not exactly the same.