The mangrove did not die in vain, if now we can go and see ourselves on the screen at Movie Towne.
The streets of Woodbrook do not flood in vain now that Derek Chin in his benevolent wisdom has saved us from the wasteland that was there before.
The great thing about having a Film Festival in a place like Trinidad is that it gives us an opportunity to reflect on our lives.
It’s money well spent if we get a moment to reflect on who we are and why we’re here and take time too, to look at other people’s lives, other people’s stories.
What we give up for the good of all.  What we sacrifice in the name of development and advancement.
For so many reasons it’s important to have a Film Festival.  In this land where philistinism runs rampant like unregulated quarries ripping away at our hills, we need a film festival like America needs to not vote for Mc Cain.
Because it’s not just about the entertainment, or the beautiful people or the celebration of such a powerful form of human expression.
It is also a chance to see ourselves, to challenge ourselves.  To honour the murdered mangrove by going to Movie Towne and seeing ourselves staring back at us.
Films about transvestite prostitutes eking out an existence in Curepe and the fate of stray dogs, and Bob Marley and a Venezuelan epic poem where they extempo in a parang style, and the defiant beauty of Haitians and Jamaicans and stickfighters and street children and countless other wondrous scenes that would never be seen by those who frequent this mangrove graveyard or those who aspire to but can’t afford to give half day’s salary to watch a movie.
The Film Festival is potentially our gayelle. Our warring ring where we confront our best and worst attributes.  Where we shout at each other and sing our war songs and weep for all that we are and all that we have forgotten to be.
In the same way that I like going to the Studio Film Club in Laventille because every now and then the nice people who come there for an evening of uplifting film art get a reminding whiff on the wind of the La Basse so if even for a moment they share something of the lives of the people who live in that area and know and understand that even out of the stink you can experience great beauty, if you want to.
There is a feeling perpetuated by the capitalists, the status quo ‘ho’s, the politicians who maximize their power by making small people feel smaller.  The feeling is that people who speak out for the environment are somehow anti-development.  That because I like trees I want to turn the world back to some kind of medieval time when people died from diseases that could be treated.
There is an assumption too, by people like me that people should know better. I naively expect that everyone knows the purpose of mangrove, and even if they don’t they have enough humility to not be dismissive about it.  That people like Derek Chin can’t really believe that the mangrove that stood there before Movie Towne was a wasteland.
There is an assumption by people like me that everyone should feel some kind of emotional attachment to this land.  That they too weep for nineteen year olds found in ditches.  That they too worry about the bleak future we are creating for our children.
But as I get older and hopefully wiser I’m having to accept that some people really don’t care, some people are really dirty capitalists at heart and would destroy anything in their path if it  made them a fast buck.
But surely people like that must know that everything has a price.  And the price we pay everyday for advancement that does not connect all the dots, is a disjointed, distracted society of those who belong and those who are trying to belong.
If nothing else, the government recognizes the need to diversify the economy and has made film one of the ways to achieve this.  But it shouldn’t just be about film as business. What about art for art’s sake?  What about correcting history’s lies and omissions? What about remembrance and reparation? What about beauty because it is beautiful?
Money can’t be the only thing that motivates our capacity to create.  Money shouldn’t be the only thing that motivates our interest in improvement and advancement.
The mangrove did not die in vain if we get a chance to live ourselves bigger and better in a Film Festival. If by just seeing ourselves on those big screens we dare to think that we are more than what is expected of us.
The Film Festival is more than just entertainment, it is our chance  to save that place from being the cultural wasteland of our capital.

Check out details of the Festival here 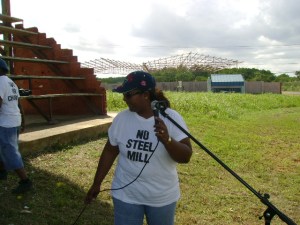 One of the things I’m always pleased about is when I see communities taking action to bring attention to their concerns, not just the environmental ones.

So today I want to send a big shout out to the Claxton Bay crew whose protests have finally borne fruit with the EMA refusing to grant a Certificate of Environmental Clearance to Essar Steel to build a port.

Their work is far from over however, and they still want the support of the people of this country and the world to put an end to the destruction of our precious mangrove not to mention the introduction of this new gas-guzzling polluter into their community.

Check out their online petition here