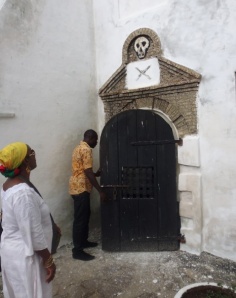 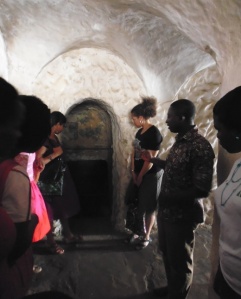 —I Wish I Knew How It Would Feel To Be Free, Nina Simone

At a bend in the road, you turn right at the University of Cape Coast and the sight of the sea is startling. Not just for the sun shining silver on its surface. The row of coconut trees makes me feel like I’ve fallen asleep and woken up on the road to Mayaro. And I know that somewhere far far away on the other side of the Atlantic, I’ve stood on the beach watching the same sun shining silver on the sea’s surface imagining what the coast in Africa looked like.

But now that I am here, there is a lump in my throat and a sense of dread building in my ears. Elmina is a pleasant enough fishing village. Some of the inhabitants are light-skinned, a leave over legacy from 400 years of ownership of Elmina Castle by the Dutch, the Portuguese and finally the English. They say they came here first for gold. But as we enter the Castle and begin the tour our guide says they were always on a mission to trade in humans.

We go down into the dungeons where the stench of centuries of human decay is still palpable. We go down into the belly of the castle to meet the noise of ancestors screaming out in agony. The roar of the sea is distant as is sun’s light. He shows us where the Governor would stand and select women captives to rape. He shows us the death dungeon with the skull and crossbones over the door where no-one came out alive. By the time we get to the Door of No Return I am plotting ways to escape.

Even as I walk here I am having that kind of out-of-body experience. This is not really me. We retrace the steps of millions of people whose names we do not know.  Who died here covered in the filth of others. Who suffered every possible indignity known to humankind to make others wealthy. The familiar weight of my bag, the camera in my hand. I focus on these things to protect me from the magnitude of what I am confronting.

To those who say it is time to forget I say that the stench of 400 years of human waste is unforgettable. To those who say black people should get over it, I say we need more than ever now to understand that enslavement is real and present and as much a threat now as it was 170 years ago. Some of us choose enslavement now. To material things. And people. And the god of someone else’s ancestors. And the drivel of politicians. And looking like someone else.

We have the freedom to choose these prisons. Far from Elmina. Far from the plantations. Far from the stinking, fetid dungeons and ships, we choose to be shackled to death and decay. It is history but it still lives. The virulent strain of capitalism that runs the world right now will not think twice about reintroducing chattel slavery. And they might not ship us across the Atlantic anymore. But some of us don’t mind the cheap labour that makes our laptops. The sweat shops that make our clothes.

Some of us don’t see the connection between the material possessions that we crave that keep other people in grinding poverty. Elmina is Elmina. Elmina is also a clothing factory in Bangladesh that collapses under the weight of its own greed. Elmina is a mine in South Africa where police officers shoot to kill when the miners demand better wages and working conditions. Elmina is the scorn poured on trafficked women from South America in a police-run whorehouse in Trinidad.

Elmina lives and breathes and laughs in our faces. The dungeons are still full of the stench of our complicity in the enslavement of others for our benefit. I flee from the stench and the darkness. I run from the Door of No Return, hoping to never have to be there again. In that hot, dark place. Bent and broken.

With my modern mind that knows only freedom I wonder whether I would have survived. Whether I would have chosen death rather than face the uncertainty of the dungeons, the crossing, the plantation. Survival is a mark of defiance. I feel another surge of pride that I belong to them. They must have had serious belly. They must have been the bad-minded ones. I wonder if they didn’t long to join the sea’s percussion. Their bones the rhythm section for the waves’ endless bass.

I feel another surge of pride that we made it. That the ancestors on whose shoulders I stand were strong enough to endure that Hell that I shudder to imagine. So that I can stand here now. Free as ever. In the light at the top of this castle. Watching the sea and longing for Manzanilla.