I found myself saying things I hated the other day.  And hate has always been a word that I’ve always, um, hated.  Been feeling a bit scattered but this evening as I sit here watching the sky change colours I’m thinking about things and places and people I love or have done in the past. How the things you think you feel can change in a heartbeat. How sorrow can become joy and vice versa and how important it is to allow yourself to fully feel the whole range of emotions and somehow not allow yourself to become so caught up in the moment that you are incapable of functioning in the next.  At least, that’s what my aloof Aquarian self says I should aspire to.  I’m also coming to the conclusion that there is no such thing as love lost. You can’t lose moments you never had, can you?  So cherish the ones that you have. In other words, as my late grandmother would have put it, don’t count egg in fowl bottom. Chances are that the chicken might decide not to lay or the egg you were waiting for gets taken by a rat, kyah kyah!!  So this evening, I’m making a love list, because I have so very much to be thankful for.

Okay, and that’s a cheese wrap for today. 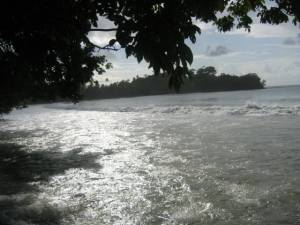 The mangrove did not die in vain, if now we can go and see ourselves on the screen at Movie Towne.
The streets of Woodbrook do not flood in vain now that Derek Chin in his benevolent wisdom has saved us from the wasteland that was there before.
The great thing about having a Film Festival in a place like Trinidad is that it gives us an opportunity to reflect on our lives.
It’s money well spent if we get a moment to reflect on who we are and why we’re here and take time too, to look at other people’s lives, other people’s stories.
What we give up for the good of all.  What we sacrifice in the name of development and advancement.
For so many reasons it’s important to have a Film Festival.  In this land where philistinism runs rampant like unregulated quarries ripping away at our hills, we need a film festival like America needs to not vote for Mc Cain.
Because it’s not just about the entertainment, or the beautiful people or the celebration of such a powerful form of human expression.
It is also a chance to see ourselves, to challenge ourselves.  To honour the murdered mangrove by going to Movie Towne and seeing ourselves staring back at us.
Films about transvestite prostitutes eking out an existence in Curepe and the fate of stray dogs, and Bob Marley and a Venezuelan epic poem where they extempo in a parang style, and the defiant beauty of Haitians and Jamaicans and stickfighters and street children and countless other wondrous scenes that would never be seen by those who frequent this mangrove graveyard or those who aspire to but can’t afford to give half day’s salary to watch a movie.
The Film Festival is potentially our gayelle. Our warring ring where we confront our best and worst attributes.  Where we shout at each other and sing our war songs and weep for all that we are and all that we have forgotten to be.
In the same way that I like going to the Studio Film Club in Laventille because every now and then the nice people who come there for an evening of uplifting film art get a reminding whiff on the wind of the La Basse so if even for a moment they share something of the lives of the people who live in that area and know and understand that even out of the stink you can experience great beauty, if you want to.
There is a feeling perpetuated by the capitalists, the status quo ‘ho’s, the politicians who maximize their power by making small people feel smaller.  The feeling is that people who speak out for the environment are somehow anti-development.  That because I like trees I want to turn the world back to some kind of medieval time when people died from diseases that could be treated.
There is an assumption too, by people like me that people should know better. I naively expect that everyone knows the purpose of mangrove, and even if they don’t they have enough humility to not be dismissive about it.  That people like Derek Chin can’t really believe that the mangrove that stood there before Movie Towne was a wasteland.
There is an assumption by people like me that everyone should feel some kind of emotional attachment to this land.  That they too weep for nineteen year olds found in ditches.  That they too worry about the bleak future we are creating for our children.
But as I get older and hopefully wiser I’m having to accept that some people really don’t care, some people are really dirty capitalists at heart and would destroy anything in their path if it  made them a fast buck.
But surely people like that must know that everything has a price.  And the price we pay everyday for advancement that does not connect all the dots, is a disjointed, distracted society of those who belong and those who are trying to belong.
If nothing else, the government recognizes the need to diversify the economy and has made film one of the ways to achieve this.  But it shouldn’t just be about film as business. What about art for art’s sake?  What about correcting history’s lies and omissions? What about remembrance and reparation? What about beauty because it is beautiful?
Money can’t be the only thing that motivates our capacity to create.  Money shouldn’t be the only thing that motivates our interest in improvement and advancement.
The mangrove did not die in vain if we get a chance to live ourselves bigger and better in a Film Festival. If by just seeing ourselves on those big screens we dare to think that we are more than what is expected of us.
The Film Festival is more than just entertainment, it is our chance  to save that place from being the cultural wasteland of our capital.

Check out details of the Festival here

Darling stop confusing me
With your wishful thinking
Hopeful embraces
Don’t you understand?
I have to go through this
I belong to here where
No-one cares and no-one loves
No light no air to live in
A place called hate
The city of fear

It’s sometimes just like sleeping
Curling up inside my private tortures
I nestle into pain
Hug suffering
Caress every ache
Play Dead, Björk

Truthfully, I’m not terribly fond of the woman, her politics or the fact that everyone is so excited at the fact that in her spare time she’s a moose murderer.
And no, I don’t think because she owns a pair of ovaries that somehow magically cancels out the fact that she’s a right wing, polar bear hating, climate change denying nightmare – her winning smile and girl next door looks serving to convince me that she could possibly be the scariest woman to be seen in western politics since Margaret Thatcher.
But what I don’t appreciate is the fact that the American media did what can only be interpreted as an honour killing of Bristol Palin just because her mother won’t let her decide what she can and can’t do with her uterus.
I mean, Sarah Palin, the fact that you’re rich enough to afford to overpopulate the planet and put more of a strain on the world’s resources doesn’t mean that other women should be stripped of their own right to make life and death decisions.
Poor Bristol Palin has to be one brave young woman to stand up to the scrutiny for what must be a trying and private time.  Hardly being an adult herself, just getting into a sense of her body, grappling with teen angst and the newly discovered bargaining power of breasts.
It’s not Bristol Palin’s fault that her society gives her such double standards.  That even politicians use sex to sell themselves. And even her dear sweet hockey mom mother has graced the cover of Vogue in some hot low cut lingerie to demonstrate that it’s not just Democrats and PETA models that can be hot.
The thing I like about those Islamic misogynists who kill their girl children if they dare do the unspeakable and have sex with some dude not sanctioned by their family is that they just get to the point.  But in America, under the guise of civilization, there are all these sinister mind games that characterize post-modern sexual politics.
So child brides are a no-no but Britney Spears prancing around provocatively in a sexified school uniform is alright.  And girls are free to get a university education but once you get there doh dig no horrors to star in your own Girls Gone Wild special.
What’s wrong with a society in which women are expected to be heroine in public, whore in private and always with a happy lipsticked smile that is Maybelline approved to stay painted on for the many many hours of your life that you will be expected to live your life and look good doing it.
As all of this has been happening I’ve been reading Infidel by Somali Ayaan Hirsi Ali who documents her experiences as a Muslim woman and her subsequent rejection of its oppression and repression of sexuality, personality and possibility.  She currently lives in hiding after the Dutch filmmaker with whom she produced a documentary on domestic violence against Muslim women was murdered.
In the book she speaks about the importance of women bearing the weight of their lives in total submission.  Without complaint to husband or children.  Silence is the dignified response to any problem for the devout and respectful Muslim woman.  But watching Bristol Palin grinning sheepishly at the Republican National Convention I can’t help but get the feeling that someone is forcing her to be silent too. Forcing her to think she was ready to be sexually active in an irresponsible way, forcing her to then do the mature, responsible thing when perhaps all she wants to do is be a teenager and sit in her room and cry at the tremendous injustices of the world.
The confrontation of female sexuality against patriarchy is clearer in cultures where women walk the streets hidden like black shadows, shrouded against the raging libidos of men who cannot and will not control their basest instincts even as they try to control everything else.
But Bristol Palin is perhaps even more disadvantaged because she doesn’t have the luxury of living in a culture that is clear about what sexuality is and what function it serves to a young woman.
So you can shake your bamsee as much as you want.  You can be what you want to be, to a point and don’t dare overstep those boundaries lest you be labeled slut, bitch or the worst insult of them all, feminist.
And don’t forget to smile for the camera and look like everything is a-okay. Because this is a free country where a young woman has a right to show all the hurt and anger and terror of not being control of her body to the whole wide world.